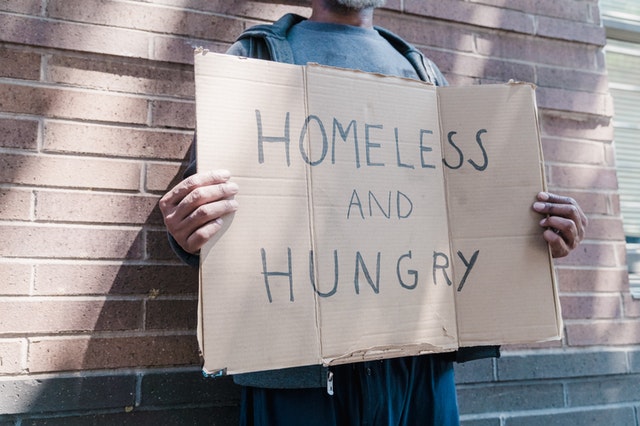 Temperatures are plummeting here in So Cal and seemed to have come down in sync with the Christmas decorations. The Holidays may be over, and it’s now January 2022, but like a winter scene on a picture postcard, the chilly weather triggered a Christmas memory.

I’d been shopping for the finishing touches to our Christmas dinner table, and as I’d pulled out of the shopping center parking lot that day, I saw a woman with a cardboard sign. Now, I’m not in the habit of always giving money to strangers, but her pleading eyes seemed to pierce through me with a strong a tug on my heart. “Perhaps I should stop and give her a few bucks,” I wondered, but it was an awkward stopping place, so I drove off.

With a pull still lingering within, I began to pray: “Lord, if you want me to give that lady some money, just give me a sign and I’ll turn around and go back.”  My answer came instantly through, of all places, my car radio: “She’s on the corner with a cardboard sign, and it’s tugging at your heart,” the song’s lyrics sang out a reply. Whoa! “If there’s a Guinness world record for quickly answered prayers, this has to be one.” I mused. And it couldn’t have been any clearer! By the time the shock of God’s instantaneous reply fully sank in, I was already at the freeway entrance and had to get on. But there was no denying that God had given me a very clear sign, one that spoke louder than the cardboard one I’d just seen.

So, of course I got back off the freeway and went back to the woman with the sign. I was able to park nearby and as I leafed through the few dollars in my wallet thinking that $5 would be generous enough, all I found was two dollars, a handful of coins, and a twenty-dollar bill. Surely you don’t want me to give this stranger a twenty, I mumbled under my breath. A thought whispered back. “Are you really gonna miss it?” Telling myself it wasn’t His voice, probably just my conscience this time, I took out the two one-dollar-bills and all the change, then proceeded towards the lady with the sign.

As I approached her, I noticed another woman nearby. “She’s my sister.” Victoria, the lady with the sign, explained. “We recently reconnected after many years. I handed her the two one-dollar-bills and fist full of coins and Victoria thanked me. We chatted some more and I learned they truly were homeless, not some pretenders like some I’ve seen, who drive away later in their expensive Mercedes. These ladies were living under a bridge and sleeping out in the cold.

I asked if they knew about all the homeless shelters in town including the one at our church and asked if they’d gone to any of them. “Not too often,” she said, “I have a lung condition and can’t be around some of the people that sleep in the homeless shelters, plus we have no means of transportation, so it makes it hard to get to many of them.” Victoria explained further. “But sometimes we attend the little church nearby named Conejo Church.”

I knew the church well as it was pastored by Kirk DeWitt, the son of our founding Pastor Larry DeWitt. Another sign, I thought, then reached back into my wallet. I knew then that God was further confirming I was supposed to help these ladies out.

Victoria’s face lit up with joy as I handed her a twenty dollar bill. “Now we can get a room at a hotel and not have to sleep out in the cold.” She exclaimed and I was humbled with her reminder that temperatures had plummeted into the 30’s that week too. Truly God wanted them to be protected from the cold elements and He’d given me clear direction through a cardboard sign, a song on the radio and a familiar church that is known for its’ heart for the homeless. Ironically, until that day I’d never heard that song before and haven’t heard it since, but I’m told it’s a real song and was written and performed by a man named Mathew West. So Mathew, if you see this story, know that God also used you mightily that day.

God speaks to us in many ways. For me, it’s usually it’s through the Bible, but sometimes He speaks to our “inner” ear with His still quiet voice. Whatever way He chooses to speak to me this new year, I know I need to be listening and I hope you will too. In my speaking engagements I often talk about how we can listen with the ears of our heart. The poem here speaks to this concept and is included in my book Fresh Eyes: Seeing God in the Unexpected. And much like the kind of stories in that book, this story will likely wind up in my sequel to Fresh Eyes.

Are you considering a meaningful New Year’s resolution? Why not ask God to improve your spiritual hearing, then listen for his voice. Tell me your listening story in the comments here and maybe I’ll use it my the next book.

Inside your mind’s ear,

Is the voice that He does whisper,

To the song of your heart so clear.

Not wanting to be missed.

A message He gives,

So listen close and don’t deny,

When His melodious word

Is given by and by.

He is the author of everyone’s song

The composer of your life.

And He knows of every joy

And of every strife.

He hits the high notes and the low,

Every place your heart song goes.

And placing the notes of each measure

His voice with ours, together,

Can bring harmony, rhythm and rhyme.